Review of Michael Nicolella at Cornish College of the Arts by Delaney M.

I went to see Michael Nicolella’s recital at Cornish’s Poncho Performance Hall. Nicolella is a recent addition to the faculty at Cornish and trained at Yale, Berklee College of Music, and the Accademia Musicale Chigiana in Siena, Italy. Nicolella is a classical guitar virtuoso; he has even been compared to Andres Segovia! 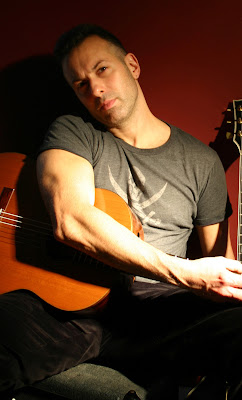 Nicolella’s show was extremely eclectic and diverse. The songs ranged from classical Sonatas by Domenico Scarlatti to more Latin pieces by Isaac Albeniz, and finally to Little Wing by Jimi Hendrix. Some of the songs were pretty mind bending especially Bobby J, a song by Laurence Crane who was a huge fan of minimalism, which basically means very few notes and lots of distortion and pitch bending. The true gem of the show however, was Nicolella’s technical skill. He is an amazing performer both on the acoustic guitar and the electric guitar, and his years of training are very obvious.

The performance venue, Poncho Hall, was very intimate. With only about forty or so seats every seat in the house has an up close and personal view of the performer. The hall was also very well constructed and creates a lot of good natural reverb for the music being performed. All in all the hall has a very homey feel, with the laid back environment, small number of seats, and the well used chairs and stage props.

This show is definitely appropriate for all ages, however I would recommend it to people who love music and perhaps know at least a little about music theory, as Nicolella spends a couple minutes before each piece explaining its history and the way it is supposed to be played. There is no doubt that technically Michael Nicolella is phenomenal, and if you are up for a music experience that will take you to places you have never been before, then his recital is a great choice!

The Michael Nicolella concert was one night only. Next up in Cornish's Music Series, pianist Rachel Kiyo Iwaasa presents Cosmophony, a concert inspired by the solar system, Saturday, February 6th at PONCHO Performance Hall at Cornish College of the Arts. For more info, visit the Cornish Music Series webpage.