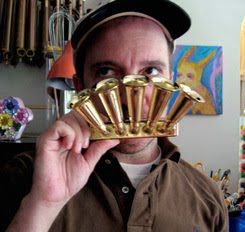 Review of Strange Powers: Stephin Merritt and The Magnetic Fields by Rheanna M.

The music starts, and you see the nearly-bald, perpetually puppy-dog-eyed Stephin Merritt, founder of the band The Magnetic Fields, who stars in this artsy documentary about the life of a true musical genius. The Magnetic Fields, to some, are a classically unpredictable band that covers more genres than a record store, but to most they are unknown. Fortunately, this film is one that can be enjoyed by all, fan or not.

It starts off by introducing the band - how the life-long friendship of band members Stephin Merritt and Claudia Gonson came to form this collaboration of poet and musician, spanning all the way back to 1989. The somber cuteness of Merritt is paired with the energizing frankness of Gonson, and the two are constantly bickering in front of the camera. This seems to work for them, however, as the music they have created over the years is constantly changing and is always a fresh breath of air. The film shows the band recording in Merritt’s studio apartment, and it is inspiring to see what one can create from the comfort of their own home.

Since the film focuses not only on the band, but also mainly on Merritt himself, we get an exclusive peek into the life of this indie rock prodigy. His blase, macabre humor is a little difficult to pick up on at first, but once the story progresses it starts to make sense, and you begin to see how it is reflected in The Magnetic Fields' music. This film is brilliantly constructed with gorgeous footage of both the band and the man behind it all, and even as an avid Fields fan I was pleasantly surprised. The ten years of work behind getting the footage for this film has certainly not gone to waste.