Review of A Tuna Christmas at ArtsWest by Safaa D.

Light bulb earrings, wannabe Methodists, and a whole lot of Honky-Tonk are the ingredients for a real country Christmas.

Welcome to Tuna. This fictional town happens to be the third smallest in Texas, meaning you can't spit snoose at a window without it being reported on the local radio station. 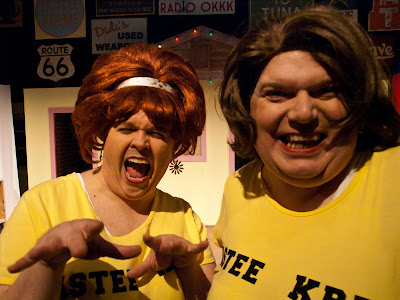 Photo by Michael Brunk
It’s that time of year again when the tinsel blows freely and the eggnog has a questionable amount of nutmeg in it. The annual yard decorating contest is under way and residents fear the notorious Christmas phantom, one who can deflate a Santa Clause quick as a wink.

We learn about Bertha Bumiller trying to bring her family together for the holidays, hear the annual announcement on the local OKKK radio station advising not to give exotic dangerous pets as gifts. The #249 Klan announces it's about to put on "The Whitest Christmas Ever." Priorities in this play have themselves tangled up as bad as last years lights.

A politically incorrect and somewhat disjointed portrayal of small town politics, antics and neighbors coming together as one big family...that is if they're not late, three sheets to the wind, or have been decapitated by an unwanted pet Iguana.

This wonderful parade of over 20 characters is portrayed by two quick-witted men. That's right, two. Split second costume, personality and gender changes are wrangled by the capable Jay Jenkins and Buddy Mahoney. They portray diverse characters, from two radio hosts preparing for their annual potluck dinner, to two cutesy diner girls thawing hamburger with hairdryers, to town resident Didi complaining about her husband’s lack ability to remain sober (there are no Martians in Texas, right?) Without a doubt, these two actors keep the show rolling. 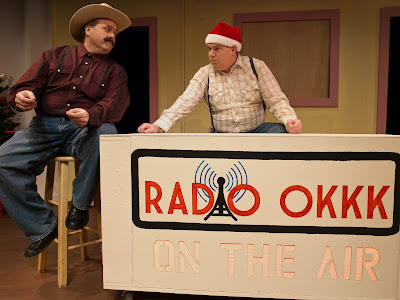 Photo by Michael Brunk
One of my favorite things about the play is the set. I brought my grandmother to the play and we both immediately notice the signs: "Route 66", "Tasty Kreme" and above all "Burma Shave." This evoked in my grandmother’s memory one of the old Burma jingles: "Every shaver now can snore six more minutes than before...by using Burma Shave."

The forty costumes that must be dropped and shimmied into also evoke a sense of place. Chunky re-gifted sweaters, huge hair and Christmas light bulbs for earrings make for some real country fashion statements.

The background sounds of country music artists such as Patsy Cline remind you that you are in small-town Texas.

ArtsWest is the smallest theater I've been to. You’re almost onstage with the actors. The small space gives a sense of community and you listen in a different way. Not all audience members celebrate Christmas (myself included) but every one laughs equally well. The plot is exceptionally thin and corny, but two hours with Jenkins and Mahoney flipping through bushels of clothes and personalities, engages your interest and soon you’re laughing at the sheer cheesiness of it all.

Please visit Tuna, where an all-white cast can pull off "Young, Gifted and Black," and riding shotgun is for real.

A Tuna Christmas
ArtsWest
Through December 24