A good idea is hard to sell, and a bad one, even harder. Glengarry Glen Ross is a fantastic illustration of just that: selling an idea. And it sells it well. Just what this idea is cannot be revealed in a review without spoiling the plot; however, how the sale takes place can be discussed. A fantastically designed set, well-cast characters, and a plot to make one forget the time all seal the deal with the audience, and create a riveting piece of drama. 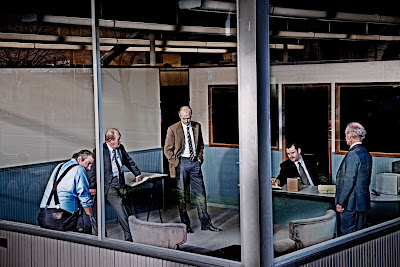 A brief, spoiler-free intro to this play can be stated in two sentences: the world is a tough place, and tough men need to sell it. The cutthroat world of real estate can be both hilarious and troubling, and you, dear readers, need to experience it.

All audiences (above the age of thirteen*, of course, due to language) will appreciate the sharp wit and brilliant retorts of the salesmen in and out of the office. In addition to being conventionally excellent actors, the showmen have incredibly memorable voices. Salesmen have wrangled just about everyone into buying something they neither wanted nor needed at one time or another; this play shows how this process is pulled off.

In a workplace where everyone is out to get everyone else, and competition is the name of the game, anything goes…as long as you can get away with it. Everyone has bad luck sometimes, and it runs in streaks. All these troubles and more are both brought to light and satirized in Glengarry Glen Ross, and I highly encourage you to see this play.