World premieres seemed to have become an important part of Seattle Symphony’s first season under new executive and music direction. On Thursday night, So Far So Good, composed by rising star Nico Muhly, had its first performance under the baton of Ludovic Morlot. The fluid piece was programmed alongside Schubert’s Unfinished Symphony and Chopin’s Piano Concerto No. 2. Although the pieces had clear contrasts, there were common elements that united the works into a cohesive entity. 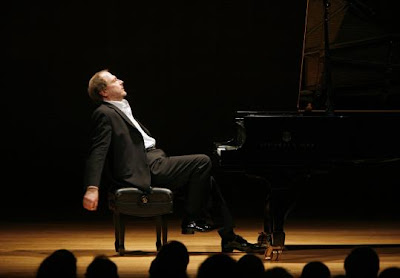 Muhly’s piece started with warm, smooth chords that instantly set the mood for the evening. The dynamics swelled smoothly as the notes undulated like currents, echoing around the string sections; the winds and brass pierced through with a contrastingly sharp but surprisingly compatible sound. So Far So Good is a very steady and flowing piece, albeit with an abrupt, but not necessarily inappropriate, ending. The orchestra sounded unified not only in its entrances and releases, but also in its phrasings and moods.

The Unfinished Symphony began with a rich tone in the lower side of the string section, and maintained the warmth despite Schubert’s sudden switches from minor to major moods. The piece’s dynamic changes were executed in perfect unison; it was as if every member of the orchestra was truly melded into one living, breathing organism. The effect was thrilling, enough to captivate even the most skeptical listener. Fittingly, the piano concerto that followed continued the sense of fascination.

Chopin is sometimes criticized for his uneven orchestration, causing the piano to struggle to be heard over the orchestra; this was not the case in Thursday’s performance. Marc-André Hamelin played delicately while giving a relaxed and bold presentation of the technically challenging concerto. The second movement, particularly, demonstrated the lyricism and beauty of Hamelin’s interpretation, as he, along with the audience, felt the emotion in every note.

Seattle Symphony delivered a cohesive and satisfying concert with the performance of a stirring world premiere alongside dynamic and delicate pieces. In the past few months, the Symphony has become a tighter ensemble with a warm, gorgeous sound to accompany its musical unity. To use the words of another: so far, so good.