Can't Look Away: The Lure of Horror Film @ EMP/SFM

"Don't open the door!" We've all been there: sitting in the movie theatre, clutching our popcorn for dear life and sitting on the edge of our seats awaiting the hero of the film to get absolutely destroyed by whatever's behind that door. The question is... why do we like that so much? 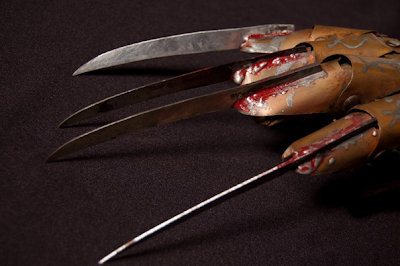 Glove worn by Freddy Krueger from A Nightmare on Elm Street 5: The Dream Child, 1989. Courtesy of Wesley Cannon

EMP/SFM's new exhibit, Can't Look Away: The Lure of Horror Film attempts to answer this question. Featuring an interactive scream booth, footage from horror films old and new, artifacts from famous films, and more, this exhibit will be sure to make your spine tingle.

NOTE: Due to the sometimes graphic nature of the exhibit, it has been given a PG-13 Rating