A Not-So-Ruined Production of Hope, Humor, and Humility
by Nikolina S

Rarely does theater inspire us to do better, to be better, to feel, that, as adolescents we can make a difference in the world. I came into Ruined believing it to be a story of yet another African tragedy; I was precocious, however, in assuming that this would be the extent of it. The Congolese War is indeed an African tragedy, with hundreds of thousands of cases of repeated rapes and assaults on women, millions dead, and a large chunk of the population in refugee camps, the conflict is vicious and the fight for survival is severe. Ruined is not only able to shed light on the issue, enlightening audience goers of the horrors that young women must face on a daily basis in the Congo, but outstandingly enough, it is able to create the story with humor and humility. More importantly however, it is able to make what is happening in the Congo relevant to each and every one of us. 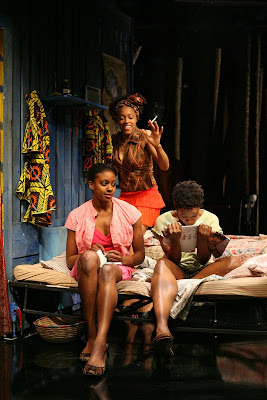 Photo by Joan Marcus
The story introduces three young women, all different and unique in their own ways but all sharing a similar fate: prostitution to escape the war. Like many young girls, they enjoy rap music, singing, dancing and reading romantic novels. While Josephine and Salima oblige the requests of the many soldiers that come into Mama Nadi’s, the audience soon realizes where the title Ruined comes from. The third young woman, Sophie is a victim of a brutal and mutilating rape, all too common in the Congo, which in turn makes her unable to engage in sexual behavior. Despite Mama Nadi’s initial unwillingness to take Sophie in, screaming “I’m running a business, not a mission!” she eventually succumbs as a favor to her friend, Christian, and a box of Belgian chocolates. The crude language and disturbing scenes of rape and groping are balanced with comedic relief from Christian, the local trader and Mama Nadi’s friend. 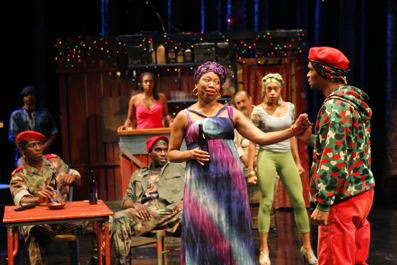 Photo by Chris Bennion
I found myself hating Mama Nadi for putting the girls up to prostitution while she sat behind the bar counter and greedily collected her money, emotionless as to what the girls were going though. We soon realize, however, that Mama Nadi is a very complex, multidimensional character. Although she makes the girls prostitute, she is in fact protecting them at the same time by providing them with a roof over their heads, food to eat and a refuge from the barbarous soldiers that repeatedly assaulted the girls in their former lives. In one of the most powerful moments of the play, Sophie, who limps as a result of the assaults, reveals “every step I take I feel them in me.” I didn’t find myself weeping crocodile tears, instead I was awed at the courage of these women who are not much older than myself. The fact that this young girl can still hold her head high and continue with her life is extremely inspiring because it shows that despite the horrible hardships faced by so many women, there is still hope for a better tomorrow. Perhaps the most entertaining aspect of the play was the odd love connection between the giddy Christian and the pessimistic Mama Nadi, who reveals her feelings on the subject: “love, it is a poisonous word.” 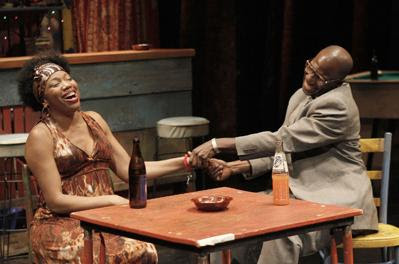 Portia as Mama Nadi and Russell G. Jones as Christian. Photo by Chris Bennion.
The transitions are carried out effortlessly by the music of Africa, the drumming of the cast and the beautiful voices of actors Condola Rashad (who plays Sophie) and Portia (Mama Nadi). I felt the audience mesmerized and captivated as much as myself by the incredible performance of the entire cast, particularly Portia. Portia’s portrayal of Mama Nadi invoked more fear in me than did the commander of the militia. The standing ovation from the audience at the end of the production was much deserved. 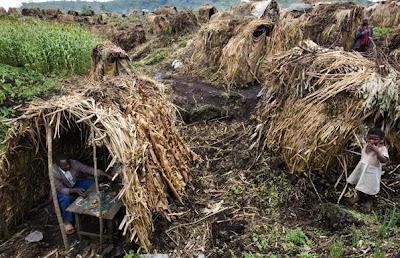 Photo by Susan Schulman. See more of Schulman's photos of the Congo at Congo Now!
I had the opportunity to interview Zaki Abdelhamid, the Director of Education and Community Programs at Intiman Theatre, and Russell Jones, the actor who portrays Christian. When we weren’t joking around about Justin Beiber or expressing our fascination with the late Michael Jackson, we were able to talk about the seriousness of what Ruined represents and what people can do to help. Both men are clearly passionate not just about the production itself but about the importance of spreading the word about the atrocities that are currently happening in the Congo. Zaki told me about Intiman’s “International Cycle,” a series of productions over the next five years that are designed to bring awareness and inspire activism for global conflicts. Ruined is the first production in the series and already the reaction has been phenomenal. Zaki was especially happy to admit that Ruined, in terms of popularity and response, is in the top 3 of all productions ever put on at the Intiman. Zaki attributes Ruined’s success to people of Seattle, “they ask me ‘what can I do?’” Many of the raped women in the Congo have genital defects that are very expensive to cure. The Panzi Hospital, the one that Sophie wishes to go to, is a real hospital that specializes in reconstructive surgery. After every show, the cast has been accepting donations, two-thirds of which go directly to the hospital and a third of which go toward supporting Intiman’s International Cycle.

TAKING ACTION
We then talked about what young people can do because I mentioned that when I saw the show, I noticed that there weren’t very many adolescents in the audience. While he did concede that, he also said that they “have seen an increase in young audiences” and are “working on bringing more young people” because its “not the lack of young people interested, we just have to reach them.”

The Congo Now project is aimed specifically at young people to inspire “awareness and activism.” Congo Now has both a Twitter and Facebook page that young adults and teenagers can check out to find out more about the conflict in the Congo. Zaki also mentioned “active invitation” to Ruined as a great way for young people to become aware of the Congolese conflict, “one person tells ten of their friends who go to see the show and then they tell ten of their friends and so on”. Zaki wants young people to become “agents of change” because, he specifies, “these issues” (rape and assault) “are dealt with not just in Africa but everywhere.” 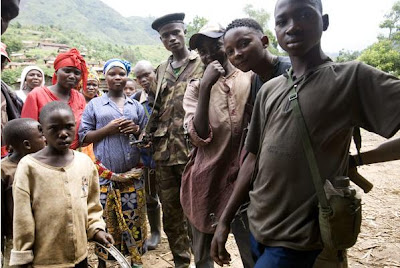 Photo by Susan Schulman. See more of Schulman's photos of the Congo at Congo Now!
When I asked Mr. Jones about what kind of message he thinks Ruined sends, without hesitation he said “hope is a necessary ingredient.” We continued to talk about theater in relation to a younger audience because this production does require a certain level of maturity and I asked him what he thought about that introducing mature content to a younger audience. “I want young people to broaden their global view because we’re all connected” Mr. Jones replied. Some ideas, like making theater more teen-friendly and affordable (Teen Tix!), came up during our discussion. In an age of constant media bombardment, Hollywood movies full of special effects, texting and internet, Mr Jones expressed “young people need to be exposed to theater.” 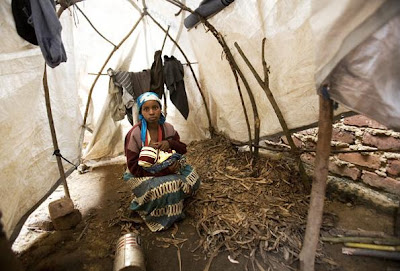 Photo by Susan Schulman. See more of Schulman's photos of the Congo at Congo Now!
Young or old, the opportunities to help women in the Congo and to help raise awareness about the atrocities in the Congolese War, which has claimed more lives than the Holocaust1 but which, unfortunately, most history teachers fail to address, are endless. It’s our turn to make a difference and help end the longest standing conflict in Africa. Helping can be as simple as becoming aware of conflict or as challenging as pressuring the media to cover the stories of these women so that more people will get involved in the movement. An easy first step you can all take is by watching Ruined and becoming more familiar with the notion of rape used as a weapon of violence in the Congo. I can promise that you will come out of Ruined not only extremely moved but inspired to join the movement for change in the Congo.

"You will not fight your battles on my body anymore" -Salima
Ruined
Intiman Theatre
Through August 15
NOTE: This is an extremely popular show. For your best chance of getting Teen Tix, we recommend attending Tuesday or Wednesday evening or Sunday afternoon. For all performances, we recommend calling ahead to check on ticket availability. Intiman's Ticket Office: 206.269.1900

CONTENT NOTE: This show contains mature content and subject matter, including war, prostitution, and rape. It is recommended for audiences ages 16 and up.