Review of Every Christmas Story Ever Told @ ArtsWest by Melissa C.

As a theatre kid in West Seattle, I have spent a lot of time at ArtsWest - the local theatre and gallery - and I was not disappointed. The gallery exhibit was impressive and less outrageous/disturbing than usual. It featured 3D paintings, unbelievable colored pencil drawings, and paintings of food that were a treat before the show. 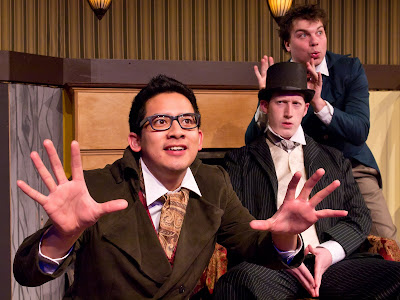 “One thing was for sure, Marly was dead” …The show began as seemingly your average Christmas Carol with Brian sitting center stage with a spotlight focused on him, then in crashed his costars, begging him not to do another version of this Dickens classic. The audience was eating it up, roaring with laughter as this play began to feel like improv with organically delivered, funny lines and audience participation. The first act was a series of fast moving skits incorporating the holiday classics and transitions of stand up about Christmas traditions around the world. The fast forward version of How the Grinch Stole Christmas was hilarious and their rendition of the Macy’s Thanksgiving Parade was a witty montage. However, there were certain sections that went on far too long. I quickly lost interest in the ‘Santa: real or not? debate’, and their rendition of Rudolf had a level of humor that was more infantile and less enjoyable than the rest of the show. 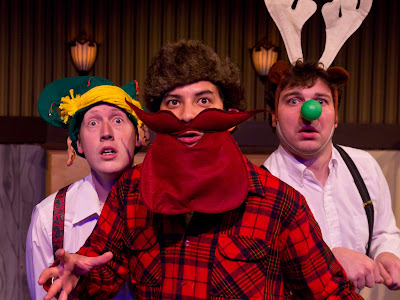 In the second act the three energetic actors got into the swing of things once they finally gave Brian the chance to sum up the Christmas Carol as he had been begging to do all along. He was gleaming with pleasure until Scrooge was visited by his old business partner - Clarence from It’s a Wonderful Life. At first Brian was outraged that Nick was planning to tarnish his beloved Christmas classic however, he eventually gave in and had the audience on the edge of their seats so that they wouldn’t miss one brilliant moment. This mash up was clearly the highlight of the show to the point that it seemed the rest this hilarious play had been written around it to fill up time. Finally ‘Every Christmas Carol Ever Sung’ ended the play on an adorable note.

Every Christmas Story Ever Told
Through Dec 24
ArtsWest