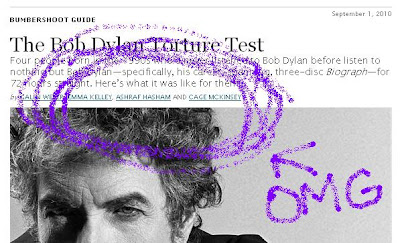 Yes, it's true. Three graduates of the Young Critics Workshop (Ashraf Hasham, '08, Emma Kelley, '10, and Cage McKinsey, '10) have their names (and words) in the Stranger's Bumbershoot issue! They each contributed to a piece called "The Bob Dylan Torture Test," wherein they were made to listen to Bob Dylan and nothing but Bob Dylan for 72 hours and then write about it. Some choice quotes:

"Hearing endless harmonica and stream-of-consciousness cacophonies is like having restless legs syndrome in your brain." - Emma Kelley

"He sounded a bit like Robin Williams doing an impression in 'I Want You.' Just putting that out there." - Ashraf Hasham

"I like the structure and chorus on 'Mr. Tambourine Man,' the overall mood on 'Masters of War,' and the subject matter and pure sorrow in 'Lonesome Death of Hattie Carroll.' 'Knockin' on Heaven's Door' is just overall a good song and probably his best mainstream hit based off of what was on this compilation. Problem is, then I hear songs like 'Million Dollar Bash' and I want to bash my head in." - Cage McKinsey

And, if you're an 11th or 12th grade writer who wants to be a better writer than you are right now, take the Young Critics Workshop, our FREE arts criticism seminar for 11th & 12th graders, taught by Stranger Theater Editor Brendan Kiley. Applications are due October 15th.