Review of How to Write a New Book for the Bible at Seattle Repertory Theatre by Melissa C.

This show, about a son reflecting back on his family’s story after his mom dies from cancer, starts out promising enough. A single door and a few carefully placed pieces of furniture displayed below gorgeous hovering light fixtures lay the scene for an apparently humorous and touching play. This perfect picture quickly wears out. 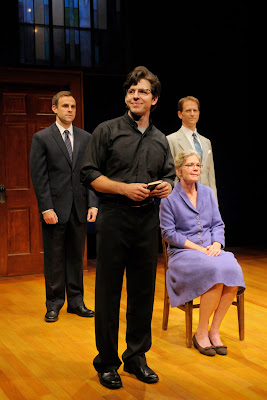 (l to r) Aaron Blakeley, Tyler Pierce, Linda Gehringer, and Leo Marks star in the world premiere of Bill Cain’s How to Write a New Book for the Bible at Seattle Repertory Theatre. Photo courtesy of kevinberne.com
I’ll start with the positive. The technical aspects of this show are simple and yet surprising. There are only four pieces of furniture used, but they creatively shift the scene from a bedroom to a doctor’s office to Washington D.C. The back screen changes colors so magnificently that it evokes emotion. The acting is equally impressive. A mere four actors spin this story for us. The main character, Billy (Tyler Pierce), is the least compelling to watch--granted it is a hard role. He is on stage the whole time acting as devoted son, holy preacher, narrator, and stand-up comedian. It is obvious that Pierce has talent, but the comedian takes over, yelling punch lines at the audience, rendering his sentimental moments fake or sarcastic. Leo Marks as his dad, on the other hand, brilliantly transforms into different parts. He is able to convincingly play everything from a sick old man to a healthy young woman. It is refreshing to watch an actor make an effort to actually act like a woman instead of playing it off as a joke. Billy’s brother (Aaron Blakely) is the opposite. He has a weakness when it comes to playing different ages, but moved me to tears when his character broke down at the Vietnam memorial wall. However, the character that is clearly holding this play together is Mary, Billy’s mom, played beautifully by Linda Gehringer. She is hilarious and authentic. I watched her age until she couldn’t walk and I believed every second of it. Every moment was so well done, I cannot praise her enough.

However, this play is missing a crucial element: a compelling script. It feels like the author, Bill Cain, took a mostly average experience and tried to force themes, religion, and humor in to make it worthy of the stage. The show begins with our narrator doing a short monologue on how every writer should write a mystery first. I assumed that would be the end of that whimsical tidbit, but for every character in the play, Mr. Cain tries to shove the mystery theme in again. A great mystery has to be attributed to each character’s life whether it works well with the story or not. The whole metaphor is extremely ironic because there is no mystery to this play for the audience to puzzle over. Everything is perfectly tied up. Each detail of every event is carefully gone over multiple times. I was left asking no questions.

From the title How to Write a New Book for the Bible, one would expect that the focus of this play would not be mystery, but rather religion, finding peace with the afterlife, and putting faith in God. However the attempts at religious insight don't fit and feel forced. Even the other characters think it is weird that Billy is a priest. Mr. Cain goes as far as to use a sermon-like form of speech which starts out as a joke and turns into an unnecessary annoyance as the play progresses; I found this style so stiff and awkward that it forced me out of the moment, and I started thanking my lucky stars that I didn’t have to go to church. Almost every reference to the bible is quickly followed by some wisecrack about those "tricky bible mothers" or a jest about Jesus. Most of the jokes were not my type of humor, but, at the performance I attended, the mainly 60+ audience was laughing uproariously at every turn the story took. To be fair, the play is clearly geared towards an older crowd; I was not able to empathize with many of the situations portrayed. But those around me were engrossed and as I sunk into my chair with a sigh of relief when the final curtain fell the rest of the audience rose and gave it a standing ovation.

This show could be witty and meaningful if done in under an hour. Instead, it drags out to two-and-a-half hours. The entire second act is entirely unnecessary; at intermission I was satisfied with the story and no longer invested in the characters. I did not need to know that they ate tomato soup and I didn’t care about the "new twists" in the story--Billie thinking that he is ill when he isn’t ill, his mother soiling herself and accepting death about three times. It became so tedious and drawn out that I would have walked out if I didn’t have to write this review. But when I look back now I can see that the technicians, actors, and director all did their jobs to perfection. When it comes down to it, it is merely a boring script not written for young audience. I’m looking forward to buying myself a ticket to this show again...in about 50 years.

How to Write a New Book for the Bible
Seattle Repertory Theatre
Through February 5, 2012