Review of Leaving Iowa at Taproot Theatre by Bethany B. 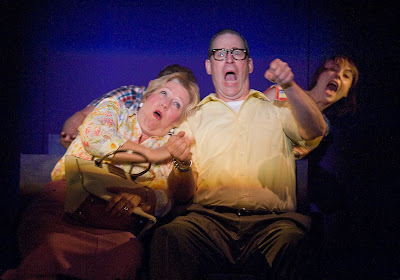 
Do you remember your last family vacation? Late night drives, annoying siblings, everlasting heat, 20 hour drives, and trying to fit in between the front seat and the trunk was exhausting enough to start a chorus of “Are we there yet?” fast and furiously. But after we got home my parents would still cheer with excitement about next year’s vacation. Vacations are the epitome of family and people you love, as much torture as they seem at the time, and Leaving Iowa is the perfect example of the family vacation without any pain at all--just extra hilarity!

Leaving Iowa creatively manages a family car, flashbacks, and the main plot in perfect order with more than enough amusement for everyone. The day after the play I rushed to my parents and giggled my way through telling them how much they were like the mom and dad in the play to every detail. I also urged them to go the next night, which they did (and they happened to love it). But my parents had an entirely different view of the play than I did, because instead of seeing the parents as mirror images of their personalities they saw the kids identical to their own. 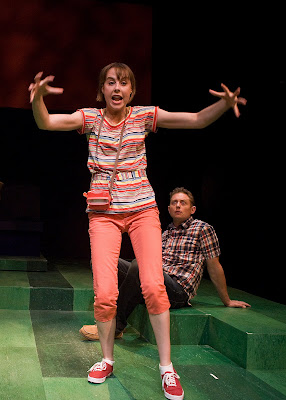 
I feel like most younger siblings (myself included) have pulled the same tricks, but the way Helen Harvester played the part of Sis was simply spectacular. In fact all the cast and production team was simply extraordinary, with my special favorite being Kim Morris, who pretty much summed up the best of adoring mother, but not the way you would expect! To be honest, all the actors were kinda my favorite. Ryan Childers and Jenny Cross both had about ten different parts, from grandparent to part of an Amish market to any passerby that the family met on the road trip. It wasn’t until about the middle that I realized all the creatively strange characters were the same actors!

I think one of my favorite parts of the play was just Taproot itself. Everyone was cracking up together, and it was comfortable. But of course, the best part of all was how much it made me laugh and how eerily spot-on some of the lines were, such as “In our family, fascinating was summer vacation f-word.” And that, plain and simple, is why you cannot miss Leaving Iowa.