Review of This Wide Night at Seattle Public Theatre by Anika M. 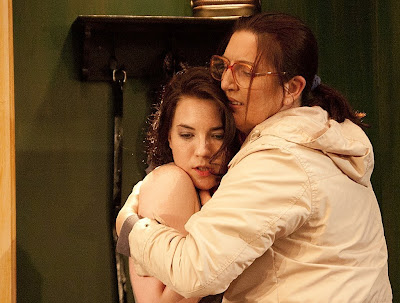 Emily Chisholm and Christina Mastin
Photo by Paul Bestock
This Wide Night at the Seattle Public Theater gives an unflinching and irrevocable look at two women attempting to cope with freedom and fear of regression after being released from prison. While this show doesn’t necessarily have a clear plot, it is heartbreaking, tumultuous, revealing, and ultimately hopeful.

This piece addresses an issue not often seen in media, literature, or art, of an impossible adjustment back into an unchanging and difficult society. Actors Emily Chisholm (who plays Marie) and Christina Mastin (Lorraine) have an undeniable chemistry and tension, which escalates, crackles, and explodes as the show progresses. They display an impressive and shocking range of emotion within the piece, leaving the tone ambiguous and undefinable, giving the audience the ability to interpret independently. 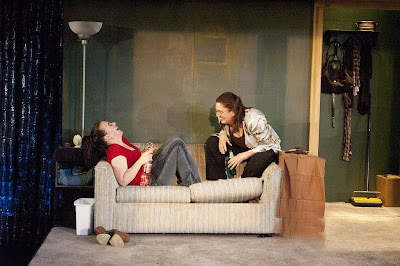 Emily Chisholm and Christina Mastin
Photo by Paul Bestock
The venue allows the audience to confront the piece personally face-to-face, with seemingly little barrier between audience and characters, because of the intimacy of the space, which is absolutely necessary for success within the script. The director, Sheila Daniels, helps to support the silent ferocity in her exciting staging of the piece, which is subtle, strong, and natural, and allows the actors to be real rather than forced and idealistic.

I would highly recommend this show, not because it’s necessarily an extraordinary piece of theatre, but rather because the concept, idea, and dialogue intertwined throughout the show presents a new look at an unadvertised part of a common system, and allowed me to begin thinking about what it means to ask for forgiveness, and what the word ‘change’ encompasses.
This Wide Night
Seattle Public Theatre
Through June 10