Aaah, baseball. Even when the home team is on a losing streak, what makes a better summer day than watching a good game with some peanuts and crackerjack? Just in time to answer that question comes Our National Game at Seattle Art Museum, a celebration of America’s pastime as well as a commentary on the legacy of the color barrier and discrimination in sports.

The three artists featured in the exhibit are Norman Rockwell, Douglas Tilden, and Jacob Lawrence, who each bring a different perspective to the game. Tilden’s sculpture, from which the exhibit takes its title, perfectly captures a moment in time; you can practically feel the breeze blowing through the field as the player prepares to bat. Rockwell’s painting The Dugout comically shows the reactions of the disappointed Cubs fans whose team was having a bad season, something any Mariners fan can relate to. I’ve always been a Rockwell fanatic, so it was wonderful to finally see a painting of his live. 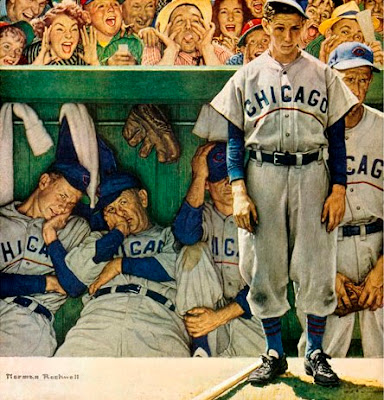 The Dugout, Norman Rockwell, 1948.
However, the works that were most fascinating to me were Jacob Lawrence’s two paintings, Strike and The Long Stretch. His paintings are pretty abstract, a wild departure from Rockwell’s and Tilden’s more realistic works. At first glance, they look like a simple expression of the motion and agility in the sport, which they do brilliantly. But look a little closer and you’ll see Lawrence’s observations on the state of racial equality in the major leagues of the 1940s. 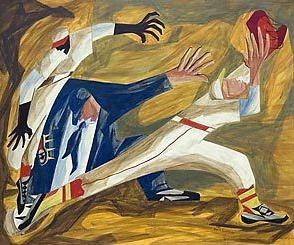 The Long Stretch, Jacob Lawrence, 1949. Courtesy of Seattle Art Museum.
Although the three artists’ works are the focus of the exhibit, there are several other photographs and paintings to give a historical context to the art and tell the story more fully. There are pictures of teams that were integrated as early as the 1880s (until the infamous Gentlemen’s Agreement that segregated baseball until 1947) as well as women’s teams, known as “Bloomer Girls,” who were playing a whole generation before Title IX.

Our National Game not only features the work of extremely talented artists, it’s also a great education in an important milestone in the nation’s history. The artwork and historical documents are a powerful visual history of the sport that unites our country.
Our National Game
Through November 27
Seattle Art Museum