ArtsWest’s Musical Theater Apprenticeship Program’s performance hits you with the sense-shocking bang that only The Rocky Horror Show can. Complemented by an impressively minimalist set, the show’s wacky antics are allowed to shine brightly, absorbing the audience’s whole focus. 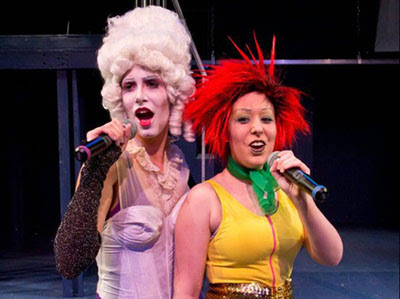 The young actors bring a boatload of fresh spark and energy to the cult classic tale, as well as a colossal amount of talent. Vocal performances by Becca Orts (playing Janet Weiss) and Ryan Floresca (playing Dr. Frank ‘N’ Furter), as well as the rest of the cast, did more than simply live up to the time-honored tunes, and I found myself wishing I had the soundtrack to take home and listen to again. The cast demonstrated a powerful love of and commitment to the show, throwing themselves into character with a vengeance. 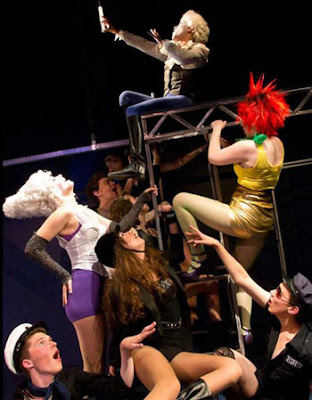 The show did seem to have some difficulty, however, in deciding what it wanted to be. Costumes and staging frequently deviated from the ever-popular film version of Rocky Horror, giving the performance its own unique identity. At the same time, audience participation lines customarily shouted in movie theaters were incorporated into the ArtsWest script, inserted by various members of the ensemble cast. These additions proved distracting and more than a little confusing, and I would imagine especially to those in the audience less familiar with the Rocky Horror story, who might feel as if there’s a joke they’re just not getting. They also elevated the traditionally mature content to a more extreme level, bordering on obscene.

But while this show is not for the faint of heart or the unaware Rocky Horror “virgin”, it will thrill die-hard fans with its talented cast, surging energy, and commitment to anything and everything Rocky.