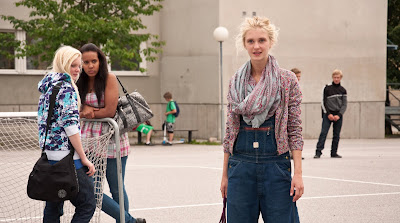 A Thousand Times Stronger provides an in-depth view of the social landscape of a Swedish high school. The students are all happy with – or at least resigned to – the way things are: the girls are firmly divided into typical cliques, and the boys rule the school. These norms are shaken up when Saga, a new, well-traveled student, arrives. Under Saga’s influence, the girls begin to speak out; however, the upset of order is not received kindly by the boys (or the teachers, for that matter.) 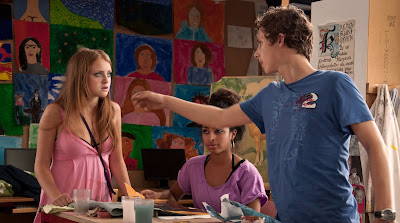 The subtle changes wrought by Saga’s presence are fascinating to watch unfold. The girls’ attempts at rebellion against the school’s typical order are funny at first, but they also reveal a deeper drama that is not entirely resolved in the film. The blatant sexism at the high school is astounding and disheartening to watch. While the film concentrates on the fairly light-hearted interactions of a small-scale social landscape within a single high school, it reveals significant themes of injustice and the process of change. The teachers “assign” Saga to help empower the girls, but the resistance to change, even a positive one, prompts deeper thought about the power of the status quo and the challenges of social change. By portraying the process of the mini-rebellion of the girls, the film subtly shifts from comedy to drama, leading to a resolution that is faintly hopeful; there is a possibility of change, but it is not certain or simple. 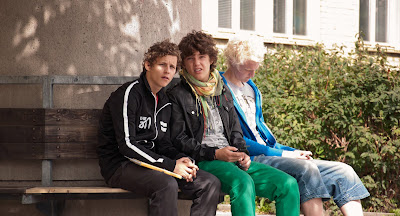 I found the similarities and differences between the cultures of Sweden and the United States very interesting, especially the fact that the same stereotypical cliques seem to exist internationally. I also admired the film’s subtle but effective way of portraying how one individual can reveal previously unquestioned injustices, and how that revelation plays out in society. On its surface, A Thousand Times Stronger is merely another story about high school social drama; however, looking back on the film surprisingly reveals the deeper themes previously mentioned. To sum it up succinctly, the film, while entertaining and seemingly light-hearted, subtly yet powerfully examines social justice and change.

More info at siff.net
In Swedish with English subtitles