Review of Fefu and Her Friends at Cornish College of the Arts by Tracy M. 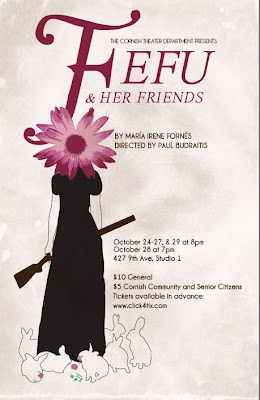 Fefu and Her Friends, a play by Cuban-American playwright Maria Irene Fornes, is set in New England in the Spring of 1935. Directed by Paul Budraitis, the play takes you through three sections in which you are invited to engage closely with the scenes and the narrative. Budraitis cleverly presents the play by dividing the scenes into different rooms where members of the audience take turns experiencing the unusual yet fascinating settings in which the characters interact, such as a kitchen, bedroom, study, and lawn.

The play starts off by introducing a metaphorical figure, a ghost that teases the main character, Fefu. A strong character who is almost controlling of her friends, Fefu personifies the irony and humor with which women have to face their struggles in life. She could be described as a sort of guiding light throughout the play.

Although the cast is entirely female, this play should not be labeled or thought of as a solely “feminist” play. It is, rather, a play that showcases a feminist, realistic and phantasmagoric approach to the experiences of women, their burdens, questions, concerns, fears, joys, and anguish in a male-dominated society.

Each female character represents a part of who we are, from Fefu as a “jokester” figure who develops into someone capable of facing her own fears and reality, to Julia who, although presented as a submissive woman, is in reality a reflection of the limitations and burdens women face.

In the end, the play will enable you to embrace your own identity, raise ideas about gender roles and stereotypes, and enable you to better comprehend the struggles women face as well as socially constructed gender stereotypes.

The unusual yet effective way in which the play is staged enables viewers to not only stay in tune with what its going on but also identify as an observer or an unexpected guest in the house of Fefu. The venue, Cornish's 9th Avenue Studios, provides a setting that enables the smooth fluctuation of the story from room to room, while engaging the viewer.

The play is powerful and very intimate in a sense, providing musical and visual references to the oppression women face. As an example, audio recordings of Hitler’s speech fill the rooms while the audience transitions from one room to another, perhaps as a reference to patriarchy and oppression.

Fefu and her Friends is a play worth seeing, fresh and invigorating, it will prompt audiences, women and men, young and old to rethink, appreciate and value what it means for every one of us, to be a woman.