Review of The Ramayana at ACT Theatre by Chloe L.
Once upon a time there was a prince named Rama. His story is called The Ramayana. 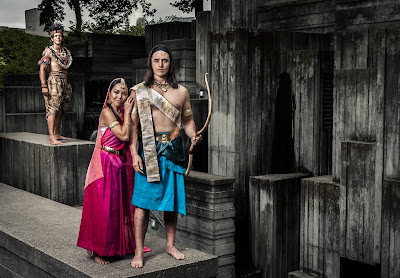 This story is old. It is considered the first poem to be written in India and was passed on orally long before it was written down. Its plot is captivating: full of talking animals, daemons, giants, kidnappings, war, and romance. The allure of this show surpasses its legendary status, coupling the old with the new.

Written and created during the course of two years by a huge collection of artists, The Ramayana stands anew. This new story is something to fall in love with.

The journey begins upon entering the theatre lobby. Before one has even glanced at a program or heard the first lines uttered, the show already seems one-of-a-kind. There is an Asian market selling and showing goods from the places where The Ramayanais traditionally told and bindis are given out to the females to wear before walking into the theatre. 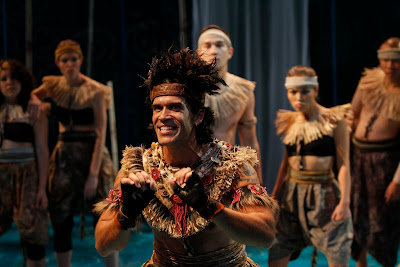 Once inside, the work that has gone into this production is obvious before the actors even walk onstage. The floor of the stage is a piece of artwork itself, painted in pastel blue and white. There are silky white curtain backdrops and the set pieces seem to be made of bamboo. When the actors walk onstage, they are clothed in colorful, diverse, and intricate costumes. The costume and set design are well thought out and creative.

One scene specifically is a perfect example of this creative expression. Ravana is said to have ten heads. Ravana’s costume has nine skulls on it (add his own head and that’s ten). His throne also has nine skulls, and if you count the skulls on each of his followers when they are all in the same room you would find another nine.

From the opening song forward there is never a dull moment. The script--by Stephanie Timm and Yusef El Guindi--is wonderfully written. Full of lighthearted moments and jokes, tense moments and suspense, The Ramayana is surprisingly easy to follow for such a complex plot. You are never left wondering what just happened or falling asleep in your seat. 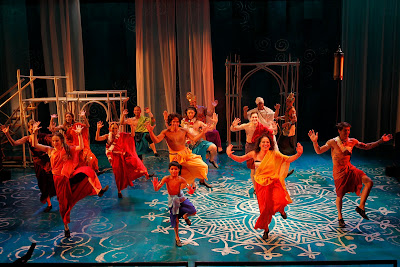 I found myself laughing throughout the show, and I was not expecting The Ramayana to be funny. I could list to you all of the actors who had amazing comedic timing, but the list would be too long, so here are some highlights: Anne Allgood’s Soorpanaka (who would have thought that having your ears cut off would be hilarious?), Brandon O’Neill’s Hanuman (He plays a talking monkey, need I say more?), and Tim Gouran’s Lakshmana (somehow making the obvious funny with every line).

Yet, throughout the entire performance, there was one aspect that attracted me the most: the dancing. Choreographer Maureen Whiting creates dances that keep the Indian flavor and excite the audience. When someone comes onstage dancing as a deer, one forgets that the performer is human. Dancers become flames and destruction.

Two years work paid off for ACT Theatre. The Ramayana is truly moving.

The Ramayana
ACT Theatre
Through November 11
More info at acttheatre.org