Review of Electra at Seattle Shakespeare Company by Greer G.

Before the ax is even brought out, Electra (Marya Sea Kaminski) has emasculated every man on stage. It would be erroneous to consider Electra as lacking a female empowerment agenda. The women of Greek tragedy cry for a heroine of their own, and Sophocles has bestowed courageous, fire-spitting Electra. For while the preceding triumphs of the Trojan War are distinctly masculine in nature, Electra is the story of “hero” Agamemnon’s daughter, left to grieve the remnants of domestic wreckage. For her father, upon returning victorious from Troy, is slain by wife Clytemnestra (Ellen Boyle) and her taken lover, Aegisthus (John Bogar). What results is a hurtling plunge into the bowels of female psychology. 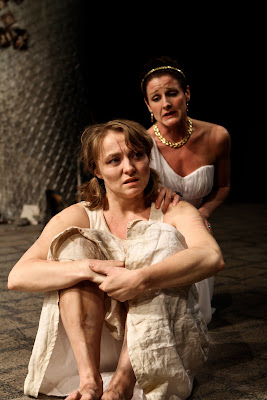 While Electra mourns for her murdered father, the tension of the play derives from her frustration with the society in which she finds herself. This combination, while a debilitating one for Electra, proves a triumphant one for Kaminski. The beauty of Kaminski's portrayal hangs in that treacherous median of Electra. Kaminski swings (not without labored exertion) between the character's polar natures of devastated child and enraged woman. As a character, Electra has little emotional arch. She does not grow to rage or resentment-- she is smoldering as the play begins. When she is calmed at the blood-splattered conclusion of the play, it is not due to her maturing as a women, but because fury has been quenched by external events. Yet this in and of itself is the crux of Electra's dilemma: she is forever a victim of circumstance. Her grief derives from her doomed lineage; her rage stems from her inability to exact her own revenge. When she laments, “the world has turned bad and so have I” it is an attempt to justify her uncharacteristic wrath. Accordingly, Kaminski is at her most effective with her enactment of grief. Clutching with bruised fingers at her belly, she moans and rocks, as though to sweat out the fever of grief. Kaminski seems perpetually on the verge of regurgitation, as though her Electra could be physically purged of her inherited agony.

If there be such a disease, it is an infectious one. One sees Electra’s digression from her true nature in her sister, Chrysothemis (Susannah Millonzi). It is said that children are often the most potent reflection of a dysfunctional household; the daughters of the House of Atreus exorcise their anguish with distinction. Susannah Millonzi’s portrayal of daughter Chrysothemis is marked by the character’s girlish delusion. Whereas Electra furiously pounds the floor with her fists, Chrysothemis is careful (and perhaps content) to tread as a servant in her own house.

Director Sheila Daniels exhibits brilliant control of paradox with her casting of darling mums and step-dad, Ellen Boyle and John Bogar, respectively. While daughters Electra and Chrysothemis represent the crudity (and ugly reality) of mourning, Clytemnestra and Aegisthus dress and act as though disgruntled hosts at spoilt Noël Coward dinner party. Their soiree attire is grossly out of place with their heinous murder, furthering audience sympathy for Electra’s plight. When John Bogar’s Aegisthus skips into the last act of the play in a white linen suit, cheerfully nibbling a red apple, you wish the swine a crashing sword to the skull. Thankfully, he receives just that, courtesy of Electra’s brother Orestes (Darragh Kennan).

In a tragedy wrought with carnage, it is a considerable relief that the Seattle Shakespeare Company’s production of Electra comes as a swift bullet to the brain. Aided in no small part by Frank McGuinness’ slick adaptation of the Sophocles' play, the dialogue has been stripped of all embellishment. The result is 90 minutes of family drama with little to no-reprieve. While there is no intermission, it seems somehow inappropriate that one would ponder purchasing chocolates while a woman laments depravity onstage. And when you return to your home after the performance, I sincerely hope you will find your family life a little less gruesome in comparison.