Having recently discovered the music of Gogol Bordello, I jumped at the chance to screen Gogol Bordello: Non-Stop, a documentary chronicling the lives and times of the New York based gypsy punk band. With a label like that, it’s hard to remain indifferent and not become the slightest bit interested in what this group is all about. 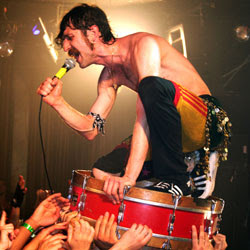 Just by listening to their music, you know there is something special about the ensemble – the part musician, actor, dancer conglomeration that is Gogol Bordello stands out among the horde of often generic and uninspired musical groups today, which is perhaps exactly what they intended. While the film does not explicitly delve into the grand picture of Bordello’s purpose, you can get a glimpse of these underlying intentions through front man, group founder and “immigrant punk” Eugene Hütz.

If there was a star in this show, Hütz would have to be it. The 37-year-old left Ukraine for the United States when he was just 17, arriving just after the U.S.S.R. had splintered apart. He brought with him his Roma heritage, musical talent and some trinkets to sell to American tourists; this he recalls somewhat fondly and bitterly, for Hütz does not seem to be one to dwell on the past. In fact, little is revealed of his youth, and what is shown is not meant to be sentimental or extract emotion from the audience. The purpose is to show the audience how Eugene Hütz, and consequently Gogol Bordello, came to be.

The film is rather straightforward in its portrayal of Gogol Bordello, and this is what I feel makes Non-stop as a documentary so strong. Audience members are shown concert scenes, backstage footage, interviews with the members and fans; any emotion or sentiment invoked comes from the individuals themselves. The subject needs little dressing up or staging to captivate the audience. You cannot help but watch in amazement as the camera follows Bordello’s ascension to fame, beginning in a crowded, hectic, frenzied Bulgarian bar and ending on a concert stage with an audience in the thousands, with plenty of dancing and partying along the way.

Yet while the band is often surrounded by this sort of lighthearted, carefree lifestyle of creating music and enjoying life, they offer a surprising number of valuable insights as well. In the last minutes of the film, Hütz reflects on what it means to “make it big.” He asks, “What is this, making it big?” for he had come to understand this as achieving what he already had – the opportunity to create music, represent himself and his people and give the gift of this knowledge and music to people.

In case the above was too lengthy or incomprehensible, here are some reasons why you should go watch Gogol Bordello: Non-Stop:

- It is a chance to listen to some of their music, or Hütz’s accent as he throws around the F-bomb like pieces of candy (both highly entertaining).
- It will make you feel like dancing.
- You get to witness some truly distinctive performances and musical talent.
- You will laugh and have fun.

All of this in 90 minutes or less! So head on over to the Northwest Film Forum on or before January 21st to catch this fine piece of documentary while it lasts and if you can’t make that, at least give their music a listen.