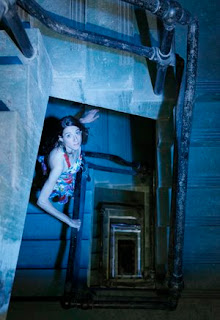 Review of Eurydice at Act Theatre, by Emma K.

Two young lovers race around the theatre, laughing, exhilarated, and carefree - this scene could easily be the start to a romantic comedy, the story of a summertime romp. Yet, Eurydice, currently playing at A Contemporary Theatre is much darker than that. Written by renowned author Sarah Ruhl, the drama is a new take on the Greek myth Orpheus. In the classic tale, Orpheus, the gifted musician, ventures to the Underworld in search of his lost love, and new bride, Eurydice, after she dies. It is from her point of view that this new version is told.

The production is intricate, sensual, and very artistic in structure. The lighting, music, and set play the largest role in creating the show’s tone. Designed by Matthew Smucker, the space is made to look like an abandoned pool with a rusty diving board and pieces of worn paper scattered about. The stage is transformed from a lifelike beach to Hell itself by the use of light and sound alone. An especially nice touch is eight strings that are attached to the stage from above. Orpheus often plucks them to create music, and later they are used to make the sound of water drops falling into Hell.

As Eurydice, Renata Friedman is in turns blithe, naïve, and brazen. Although she does not evoke as much of the audience’s sympathy as she could, she follows her character’s arc with precision. Her transformation from an innocent girl to an emotionally broken woman is believable, while her relationship with her father is particularly touching. It is that character, played so delicately by Mark Chamberlin that is the show’s center. Chamberlin gives the Father such a subtle tenderness, one cannot help but be immersed in his alternate joy or sorrow. Everything he does on stage has a gentleness, however small the action may be. This is particularly apparent when he builds Eurydice a room of string, taking care to make it as comfortable as possible even though it’s in Hell.

As most talented musician in all of Greece, Trick Danneker is appropriately childlike – he plays the determined Orpheus with the quality of a teenager, experiencing life for the first time. Also effective is Paul Morgan Stetler as the Nasty Interesting Man/Child, both representations of the God of the Underworld. His character is perhaps the most intriguingly changed from the original Greek myth – his youthful, repulsive, and uneasy manner is very fascinating to watch, and Stetler plays it with an excellent sense of comedy.

Finally, Tim Hyland, Tracy Hyland, and Ann Allgood play The Stones (who sit at the gates of Hell). Like the Nasty Interesting Man, their characters have been adapted into something very interesting – they almost resemble clowns, but all in grey and with a sense of foreboding. In certain sections their antics distract from the poignancy, but over all they are very entertaining and ironic.

As director Allison Narver writes in her program note, the play expects much from the audience. They must be willing to accept and immerse themselves in the unique performance – if they don’t believe, nothing can be gained. The show itself is beautiful, and a testament to how much of an artistic experience the theatre can become, yet most of this comes from the show’s design rather than its writing. Sarah Ruhl’s style is very lyrical and thought-provoking, but what her intention was in rewriting this familiar myth is not clear. If she has a message, it doesn’t carry over to the audience, which leaves a sense of incompleteness come curtain call.
The production is evocative, nostalgic, and moving for all ages - as it dwells on the naivety of youth and regret of the old - but ultimately offers more questions than answers.