Thursday night, the Pacific Northwest Ballet unveiled Director’s Choice, a collection of four smaller ballets and works. PNB Artistic Director Peter Boal has striven recently to encourage modern and new ballets, and he remains true to this goal in Director’s Choice. All of the four works presented premiered after 1990—one, The Seasons, enjoys its world premiere here. Each ballet is its own creation, and are powerful statements in their own right. Presented together, they reveal the PNB’s commitment to presenting a variety of fascinating new works. 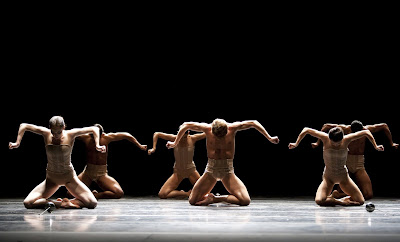 The first, Petite Mort, is a visually striking dance that quickly grabs your attention. When the curtain opens, six men with swords raised slowly back towards the front of the stage; figures swirl in and out of the darkness at the back of the stage. Dreamlike and surreal, the dancers occasionally run an enormous sheet across the stage. When it falls, you discover that the scene behind it has changed entirely. It is the dancing, though, that is truly fascinating, shifting from graceful steps and duets to stilted, broken movements. At other times, the female dancers come on stage behind enormous wheeled black gowns. They play behind and then leap out from them—the imagery is starkly entrancing. Remarkable and rich in meaning, it truly has to be seen to be appreciated. 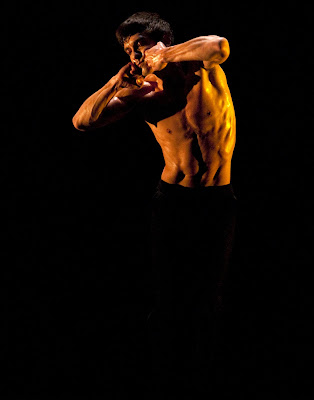 Mopey, presented next, is sure to be a favorite with Teen Tix patrons. James Moore is spectacular in this one-man ballet, a perfectly done exploration of a teenage mind. Beginning with Moore whipping around the stage in anxious, frenzied steps, his angst is palpable. The dance is inward; Moore dances around the stage like a train of thought, moving between feelings in a smooth flow. Next becoming whimsical and vivacious, Moore marvels in his strength and energy with a crazed enthusiasm, leaping about the stage. Mopey changes again; the music stops and Moore begins a writhing dance filled with anger and violence, descending further into chaos as he goes. Mopey perfectly captures the changeability and volatility of the teenage mind, and is one of the show’s best moments.

Peter Boal makes a pitch toward the more traditional in The Seasons—here, tutus and more formal hallmarks of ballet return, and the choreography becomes less experimental. Though not as intellectually rich as the previous two, The Seasons is an interesting revision of an older ballet. The Seasons flows through each and explores its different moods, weaving a narrative of love blossoming from the cold of winter and into the craze of summer. The dance shines through autumn’s revelry, capturing the season’s austerity and frenzy. While The Seasons is a well-done work by itself, young viewers may find that it pales in comparison with the first two.

The dancers seemed determined to have some plain fun at the show’s close with West Side Story Suite. Perfectly suited for the grace and power of ballet, the dancers dominate the dance and feeling of West Side Story. While some numbers don’t shine as brightly as others, the show ends on a high note with the dancers on stage, singing “Somewhere” with all the passion and power it deserves.

Director’s Choice refuses to be pinned down into any category. An innovative, provocative, and breathtaking show, it brings together the classical and the modern. Worthwhile, fascinating, and imaginative, the imagery and energy of it will remain with you long after you have left the theatre.