Lydia Davis does not make me want to write my history paper. Somehow, after her lecture last Wednesday night at Benaroya Hall, the Manhattan Project does not seem as important to write about as, say, the dried mangoes I am eating. It sounds weird, I know—the development of the atomic bomb seems much more consequential than dehydrated fruit which in a matter of hours will undergo quite a few chemical changes and end up in one of the local wastewater treatment plants. Davis does a glorious job of writing about the everyday, and frankly, her literature is loads more inspiring than the Department of Energy’s dry definition of “radioactivity.” 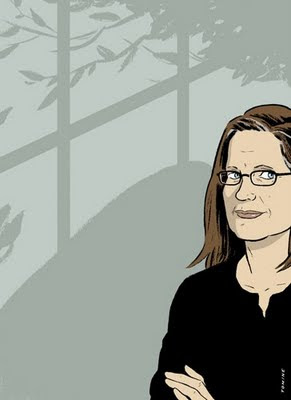 Illustration by Adrian Tomine in the October 19, 2009 issue of The New Yorker.

Davis read her lecture, "A Beloved Duck Gets Cooked: The Influence of Innovative Forms" instead of speaking spontaneously, she said, “because I’m really not gifted that way.” It is apparent that indeed she is a writer and not a speaker, but her quiet, initially nervous tone did not undermine her sharp wit and hilarious honesty.

The lecture was a wonderful narrative of Davis’s path to becoming a writer. Incorporating many examples of short short literature, Davis painted a vivid picture of the work that inspired her own writing. One such example was Sparrow’s "Poem":

This poem replaces
All my previous poems.

Woven in with these tiny gems were examples of her own work, like "Lessons in French", which is exactly what the title suggests: a short story intended to teach the reader a little bit of French. “Lessons in French” was inspired by Bob Pearlman’s “Analogy,” a grammar lesson poem.

Davis is a writer of short short fiction who breaks all the rules. She writes stories of all lengths—from 2 lines to several pages. Some of her stories have no plot, no characters, no apparent theme. She writes what she what she needs to. “It never works to write with an agenda,” she said on Wednesday. (Bad news for my history paper.) She has also translated several French novels, memoirs, and volumes of literary criticism. She is a professor of creative writing at SUNY Albany in upstate New York.

Davis also included several stories of frustration and failure from the tale of her story-writing career. After being exposed to some apparently paralyzingly inspiring literature in her early twenties, Davis became somewhat of a recluse for about two weeks, “agonizing” over her own writing and trying desperately to write something just as captivating. When a friend suggested to her that she needed to get outside and do something, she grew even more distraught. “I wasn’t doing nothing, I was agonizing,” she told us. (It’s hard not to empathize.) Davis admits that not all of her stories are great. Some are failures, she says. That’s what being a writer is.

It is so clear that writing is Davis’s passion. Lately, she has been spending most of her time translating and teaching, which she says “really must stop.” Her lecture clearly illustrated her love for writing and literature.

I highly recommend that you read Davis’s work—you will indubitably find something you love (or at least something that makes you think). My favorite so far is her short story "Three Letters of Complaint." I fully intend to explore more of her work—after I finish that history paper.