West. Whether used as a noun, adjective or adverb, this four letter word usually refers to that cardinal point on the compass, opposite of east, the direction of the sunset. West, "Awesome"'s new concert-play-performance art hybrid of a piece does not mold to this definition, but rather creates a new experience about the word. 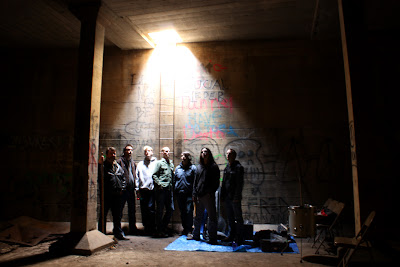 Every member of "Awesome" moves beyond the definition in their descriptions of West; they talk about the history of movement West, and movement in general, an idea perhaps autobiographical as at least half of the group originated from East of Seattle. Evan describes West as not a place, but rather “a direction, moving toward something, and away something else.” Rob’s description of West consists of a list: cartographers, mapmaking, Lewis & Clark, Starbucks, Microsoft, and Silicon Valley. To "Awesome", these elements represent both the traditional American idea of westward expansion, but also the modern day technological hotspot that is the West Coast. Adding to Rob’s list, David speaks of the destruction of Native Americans by the westward movement of American settlers, a part of the history of the West too great to ignore. He and John noted that West, while evoking feelings of “hugeness” and “grandness”, also brings a sense of melancholy. They explain that with the excitement and novelty of movement comes the inevitable fact of leaving home, the memories that you take with you a sometimes sorrowful, sometimes sweet reminder of the past. For Kirk, though, the message he hopes to convey is to “never stop moving,” despite it’s bittersweet nature. Basil’s description was most personal, relating West to his feelings after growing up in a small New Hampshire town for his entire life. After completing college, he wanted to “get as far away from [his] hometown as possible,” somewhere where he was a stranger and, akin to the pioneers of the West, his success or failure was dependant completely on himself. With its myriad of ideas, emotions, historical references and at least eight instruments, West and its performers bring a dynamic culmination to more than a year’s worth of hard work.