"Awesome"
Part 3 of 6: On Surviving High School
By Arista B

Question: What is your best piece of advice for surviving high school?

BASIL Basil offers an extended view of high school as a stepping stone rather than a life changing experience. He says, “Trust that it’s not the ultimate time of your life. It’s a jungle now but later you’ll look back with nothing but rosy memories.” He says that, “It’s simply a step to bigger and better things.” In other words, don’t stress the small stuff because in the end, high school does not define you.

JOHN From John, a very practical perspective is offered. He says that the best way to survive high school is to not procrastinate, but try to form valuable habits early on. When asked how to make friends, his advice is, “Try to expose yourself as much as possible to a variety of new activities.” 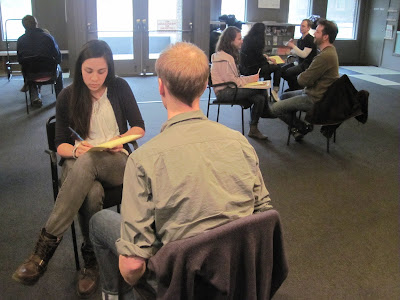 Arista notes Kirk's wise advice: "Don't ever apologize for who you are."

DAVID David’s advice is loaded with optimism and he says that what he notices among adults as well as high school students is that, “Fear is the most paralyzing thing, especially fear of failure.” That being said, he urges people to embrace every new experience as an opportunity. For him, it means appreciating the positive things in all situations. When he turned 36, he thought, “I’m so glad I’m not 35 anymore.”

ROB Rob disproves the popular stereotypes of high school students by saying, “You don’t need to drink or do drugs to survive high school.” His solution? He kept busy by getting involved with an underground newspaper called The Kneely News and Rolfe.

EVAN Joking about how he was always picked last for dodge ball, Evan admits he was short in high school. He came from a small town and says, “I wished I had grown up in a place with more opportunities.” However, he made surviving high school possible by staying busy in his school’s numerous arts programs.

KIRK In high school, Kirk was bullied frequently. However from this experience, he is able to offer valuable advice to current students. Comparing his past with bullies to conditioned submissiveness, he says, “Don’t ever apologize for who you are.” Kirk stresses the importance of not falling victim to trends, but rather developing individuality as a way to staying true to your own goals.