Director Tristan Patterson’s youth-and-revolt documentary Dragonslayer chronicles the life of a young anarchist skateboarder named “Screech” over the course of eight months in and around Fullerton, Calif.

“I see this as a lovers-on-the-run film,” says director Patterson, who dropped by for the opening of his new film showing at the Northwest Film Forum now through Wednesday. “Instead of escaping the law, they’re escaping suburbia.” 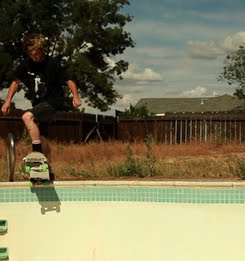 Screech and his girlfriend live moment-to-moment-–looking for a place to sleep, getting stoned, getting drunk and, of course, skateboarding--in what Patterson describes as a post-apocolyptic existence that coincides with the beginning of the country’s economic crash.

The film’s throbbing soundtrack of punk rock and indie-rock bands such as The Smiths, Best Coast and Dungen echoes the counter-culture attitudes of Screech and this So-Cal subculture where sex and drugs and rock-n-roll are only secondary to finding the next abandoned swimming pool for boarding.

The cinematography is gorgeous, making ordinary back yards look like Hollywood sets and rendering beach fire pits into epic moments, even though the content of Screech’s thoughts don’t go much beyond pot-hazed and beer-soaked child-like ponderings about his perfect world.

You may not get a satisfying sense of character arc or even plot (as Dragonslayer ends, Screech is stoned again, boarding again, with his young son on the side of the pool and you think, “Oh, that’s his son’s future?”). But you will be exposed to the free-spirited landscape of Fullerton’s skateboarding culture.