Review of Zoe|Juniper: A Crack in Everything @ On the Boards by Jackie A.

The rippling hedges on the empty stage set a peaceful but ominous atmosphere as I waited for the show to begin. Those hedges predicted the beautiful yet mysteriousZoe|Juniper: A Crack in Everything, presented at On the Boards from December 1st to December 4th.

Choreographer Zoe Scofield and visual artist Juniper Shuey fuse dance and visuals together to create a piece that felt on the cutting-edge of modern performance, and one that I was heavily absorbed in throughout. 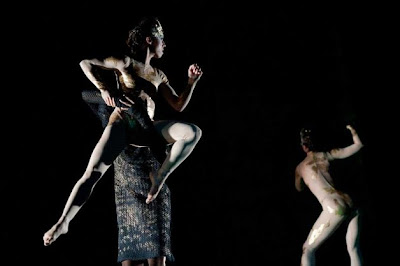 Scofield and Shuey promise an “examination of the gap between cause and effect”. They slow time and stretch each moment into a lifetime. One dancer, as she moves unhurriedly across a glass wall, traces her outline with a red marker to create a history of her movement. A single instant is thereby transformed into a prolonged, painful struggle. During other moments, the frenetic ticking of a clock speeds up time, while also serving as an anchor in reality.

The dance, performed impeccably by dancers Christiana Axelsen, Diana Deaver, Raja Kelly, Anna Schon, and Zoe Scofield, consists of jerky and twisting movements. It was like nothing I had ever seen before, and reminded me of the uncoordinated yet determined motions of a newborn animal.

The piece has a surreal quality that is baffling at times. During one section, a dancer grips a red string in her mouth that is pulled tight from offstage, and moves slowly backwards, stretching the string with her. This was bizarre, but completely engrossing to watch.

A Crack in Everything is strange and somewhat alien, but one part in particular is unmistakably human. One male and one female dancer strip and sit in chairs, naked, facing each other, and then unexpectedly, they begin to bark aggressively at one another. The audience laughed, undoubtedly recognizing the familiar yet embarrassing human tendency to bicker in even the most foreign of creatures. 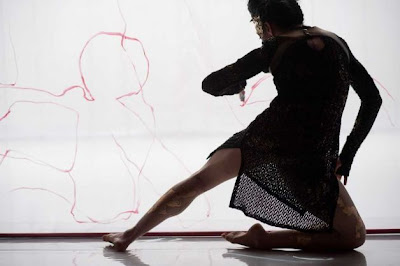 The piece advertised to explore elements of the Greek Tragedy Oresteia, but I hardly got a sense of it, except for the warrior-like costumes. However, if you watch the piece through ‘Greek Tragedy glasses’, you will probably find multiple ‘Greek’ moments. In one scene, I got a clear sense of the classic theme of power: as the four female dancers move forward, the single male dancer repeatedly picks them up and moves them backward, setting back their progress. In the end, he fails to achieve his goal, as the four females successfully make it to safety offstage. Greek interpretation: the omniscient ruler is eventually overpowered by weak but numerous underlings. A stretch, but this abstract and intriguing show begs for multiple interpretations.

As much I as wanted to make sense of A Crack in Everything at times, I couldn’t. Maybe this enigmatic quality is why I left craving more.

Zoe|Juniper: A Crack in Everything
CLOSED
Up next at On the Boards:
12 Minutes Max