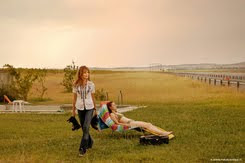 As upbeat, jazzy music sets the mood for fun, a happy family in roller skates finishes the match point of a hockey game played out on a strip of nondescript tarmac. Thus begins Swiss-French filmmaker Ursula Meier’s debut feature, Home—in stark contrast to what lies ahead.

Marthe (Isabelle Huppert), Michel (Olivier Gourmet) and their three children live a peaceful existence in a remote house that borders a long-unused stretch of highway. When the route one day suddenly opens to commuters, this bohemian clan’s daily routine is thrown into disarray: Ever-sunbathing Judith must endure the catcall honking that overpowers her portable stereo, while it quickly becomes impossible for the younger children, Julien and Marion, to safely “cross the street” to catch their school bus. What begins as annoyance and inconvenience soon crosses over into paranoia, as the incessant traffic noise leads to sleep deprivation and fears concerning prolonged exposure to exhaust loom large. Refusing to relocate, in an obstinate yet futile attempt to maintain some semblance of the normality they once enjoyed, Marthe and Michel resort to isolationism and a literal blockade. With its unique style, dark humor and tragic-hopeful denouement, Meier’s film is sure to be one of the most discussed of the quarter.