Review of The Thin Place at Intiman Theatre by Paulina Przystupa

Personally, I don’t like talking about my faith. Not because I feel like I’m a “sinner” or embarrassed by it, but because I always feel like it puts whoever is listening to me on the defensive. I always feel like they think I’m trying to convert or convince them of something, which is never my goal. If reading those first few lines you’re thinking “Hey that’s me, I like believing in something but not being super evangelical” or are just interested in religion as something open-ended, this is the play for you. 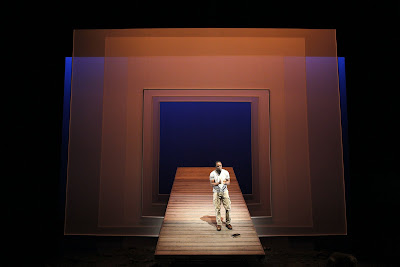 Gbenga Akinnagbe in The Thin Place at Intiman Theatre. Photo by Chris Bennion.

The Thin Place— based on 10 real life Seattleites and a podcast by The Stranger’s own Dan Savage — is a play about spirituality in Seattle. The main character, Isaac, grew up in L.A. a Pentecostal preacher’s son but has been having some questions about what that actually means. He begins to question his faith and whether or not what he learned is the ‘right’ way and he does so by “interacting” with others who’ve had the same questions. I say “interacting” since it is a one-man show and its single actor, Gbenga Akinnabe, portrays all 11 characters, on average very well. All the characters come from different backgrounds but have had very similar questions about what "faith" or "belief" or "religion" actually mean to them and to others.

Depending on your upbringing and religious background, different characters will be easier to connect with, but all of them bring you into the Isaac’s world. In order to convince the audience that this one Nigerian-American man is in fact everything from a homosexual white South African to a Muslim girl who is proud to wear her headscarf, Etta Lilienthal's set was one of the mind, the sort of place I envision being alone in and confronting past experiences. It reminded me of the universal troubles people go through but also of the pure calmness we can all feel.

However, this was occasionally disrupted by an overuse of background noises. While the use of music often allows audiences to have a deeper connection with what is on stage, the choice to have actually audible whispers from the characters Isaac meets —he hears them as voices — was too blatant. It was just that extra little bit that did not need to be there. Gbenga Akinnabe’s reaction to the voices — at least in my opinion — would have been more powerful if the audience was able to envision the noises instead of being told, “this is what it sounds like to be haunted by voices.”

However, that was the only thing that bothered me. The play is not perfect but because of that it allows the audience to see themselves as not alone in the search for identity and faith. We make mistakes, have questions, feel inexplicable things, but in the end we will almost always find an answer.