Review of The Agony and the Ecstasy of Steve Jobs @ Seattle Repertory Theatre by Chloe P. 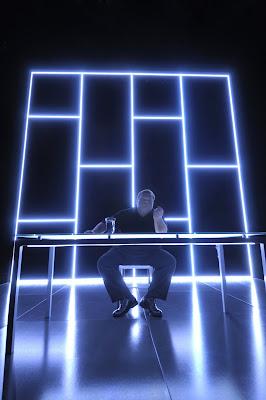 Photo courtesy of Kevin Berne
The stage design is worthy of any Apple product: sleek and minimalistic, with a simple table and chair set before a frame of LED rectangles. The lights go down, and then back up; Mike Daisey, now occupying the lone chair, wastes no time launching into his monologue, The Agony and the Ecstasy of Steve Jobs, a stunning work of nonfiction weaving together stories of Apple, Steve Jobs, and the place where our technology is made. During the course of the approximately two hours of Daisey’s performance, he discusses his love of technology, the history of Apple and Steve Jobs, and the harsh reality of the Chinese “special economic sector” where all of our electronics originate. Daisey describes the piece as “examin[ing] our technology through a very personal lens.” He thinks “it’s very important that we examine these objects (technology) and the circumstances under which they are actually built, which we are very, very unaware of. And even when we think we’re aware of it, we aren’t really fully aware.” 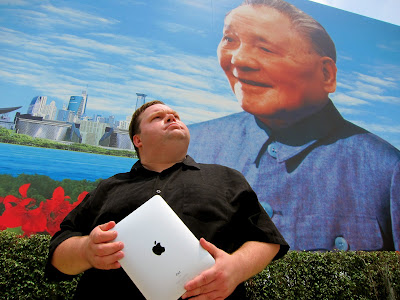 Mike Daisey in front of a famous monument to Deng Xiaopheng, in Shenzhen, China
Photography courtesy of Ursa Waz
Daisey is a captivating performer, intense and engaging. His stories are at turns hilarious and chilling. His monologue manages to be both immensely entertaining and hauntingly relevant, as, through his interwoven testimonies, he drives home an unsettling truth behind the technology we use every day, Apple or otherwise, that will stay with you long after you leave the theater. In a time when it is essentially impossible to go a day without using or seeing a laptop, cell phone, iPad, or other piece of technology, Daisey’s message is something everyone needs to hear. As Daisey puts it, you will leave “jail-broken,” with opened eyes and, hopefully, a changed perspective.

The Seattle Repertory Theatre is also hosting a miniature Apple museum in conjunction with this performance, featuring various Apple products from the company’s beginnings to the 2000’s.