Review of Into Eternity @ NW Film Forum by Samantha V.

The topic of nuclear waste is complicated. With the threat of things like earthquakes, the way that nuclear waste is handled now is not at all safe in the long term.Into Eternity is a documentary that looks at how the country of Finland plans to deal with its nuclear waste, and how they will keep it safe from contamination in the near future and into the distant future. This film has a strong Sci-Fi feel and also acts as a message to the future, helping to communicate the fact that this issue is not just ours, it's also the issue of our great-great-great grand children and beyond. 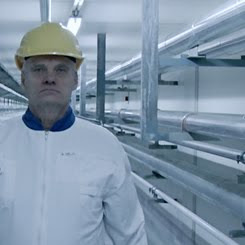 The Finnish government's answer to this issue is Onkalo, an underground repository for nuclear waste - a place you should always “Remember to forget”. When talking about what future generations might make of Onkalo, it's clear that there are “Things that you know that you don't know, and things that you don't know that you don't know”. It is unnerving to think what that statement might mean further down the road. Like if future humans mistook Onkalo for a tomb, and were accidentally exposed to the radioactivity upon opening it. Or worse. I believe that that is one of the things that this documentary was supposed to do...put you on the edge of your seat and in doing so, really get you to think about things like this.

There were a few things that I did find odd about this film. One was that there was a point near the middle where I thought that it was over (it wasn't), and two, that it seemed to drag a bit near the end. On a good note, the audio was at times very intense, and yet it didn't take away from the film at all. This documentary sheds a new, if not a kind of creepy light on the extremely sensitive subject of nuclear waste. I know that I'll tell my grandchildren to keep away from Onkalo. Will you?