I am not quite sure if The Two Gentlemen of Verona could have been any funnier, except, if I actually watched The OC or Keeping up with the Kardashians. Two Gents, playing now until April 11th at the Seattle Shakespeare Company, has something for every audience member and all those little gifts are all wrapped up in a really neat modern box. 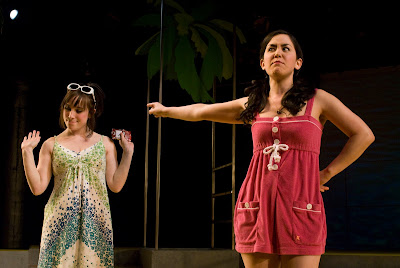 Samie Detzer as Lucetta and Hana Lass as Julia in Two Gentlemen of Verona at Seattle Shakespeare Company. Photo by Erik Stuhaug.The company decided to transplant the boot of Italy to the boot of California, bringing a very 21st century twist to the tale. The two gentlemen, Proteus (Daniel Brockley) and Valentine (Connor Toms) - although the term ‘gentlemen’ only really applies to their gender - are childhood buddies that get split up when Valentine decides to go to college and leave Proteus to his wooing of Julia (Hana Lass). However, a mix-up (not mixer) occurs and Proteus is also shipped away to school leaving Julia behind. However, at college Proteus finds himself falling for Valentine’s sweetheart, Sylvia (Emily Grogan). Enter occasionally tragic, mostly hilarious, shenanigans.

The cast did an exceptional job at uniting the extreme modernity of their new ‘world' and the 500-year-old words of Shakespeare. So much so that I swear Shakespeare dreamed of text messages when he wrote lines like “my father calls.” While the show may be set in the extreme opulence of our techno-savvy times and take the shallowness of our reality-TV culture as a setting, it was incredibly moving. This was achieved by the ability of the entire cast to keep the words of Shakespeare genuine to the feelings of these confused youths. Daniel Brockley as Proteus and Connor Toms as Valentine, the two gentlemen of Verona. Photo by Erik Stuhaug.

While setting it in “the rich do what they want” society could end up being the focus of the play it did not overshadow the story. They were able to balance the shallowness of rich 20-year-olds with how any person would feel in those situations. Young people go from one obsession to the next and always have a touch of bi-polarism. However it is also true that youth, and especially these, are not as defined by their society as the a reality TV show of them would suggest, and because of that anyone, even me who finds shows like The OC boring as hell, can identify with the Twilight-obsessed Julia and the beautiful and wealthy—yet kind—Sylvia.

While those characters may be easy to dismiss on TV, the words of Shakespeare give them a depth of understanding that makes them regular people. It shows that although they may be rich and snobby they have problems that anyone, especially in their teenage years, can face.

Also, on a sort of side-yet-parallel note, Crab was awesome. No other way to describe it. He was probably one of the funniest characters and most well acted. I won't give away that secret so everyone needs to go and see this play but just look out for him. Anyways The Two Gentlemen of Verona is playing until April 11th at the Seattle Shakespeare Company in the Center House Theatre. Tickets are only $5 for Teen Tix members and varying amounts over $20 for adults. Go and see it.