Review of Charley's Aunt at Taproot Theatre by Emma Me.

“What the deuce?” This delightful British phrase is heard time and again throughout the production of Charley’s Aunt at the newly restored Taproot Theater. The stars of the show are two college chums in England, Jack and Charley, who have their hearts set on proposing to their beloved women, Amy and Kitty. On the eve of the ladies’ departure to Scotland, the gents make one final effort to capture their hearts by inviting them over for tea. Only one problem arises—the expected chaperone, Charley’s millionaire aunt, is MIA. 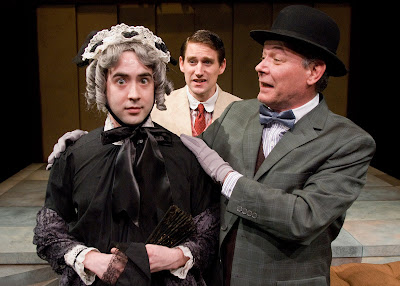 Steve West, Eric Riedmann and Nolan Palmer in Charley's Aunt. Photo by Erik Stuhaug.
So begins a succession of hilarity as the two men persuade a fellow (male) classmate to disguise himself as the absent aunt. While struggling to maintain a façade of normality, Jack and Charley attempt to spend time with their sweethearts and help their fellow characters find love. In addition, they must keep their “aunt” from getting too friendly with their dear Amy and Kitty. Throw in an overprotective and greedy guardian, more than one long-lost love story, a typically hilarious British butler, and a wacky afternoon is sure to ensue.

Filled with many twists, turns, and love triangles, Charley’s Aunt is a lighthearted comical play that audiences from teenagers to senior citizens would enjoy. The casual slang and formal courtship rituals of nineteenth century England feature prominently in the stabs of humor throughout the play. Engaging acting and traditional costumes only add to the sensation of being in a college dormitory. For anyone looking for a night of laughter and entertainment, Charley’s Aunt does not disappoint in the least.