ON THE BOARDS October 15, 2009 - A packed theatre buzzes with excitement, waiting for the new Reggie Watts comedic spectacular featuring Tommy Smith, Transition. The audience faces a large projection screen featuring just the legs of a skateboarder that is intermittently disrupted by a single frame of a face and an electronic noise. We sit on the edge of our seats to try to predict the interruption, waiting for the next chance to decode what we see. 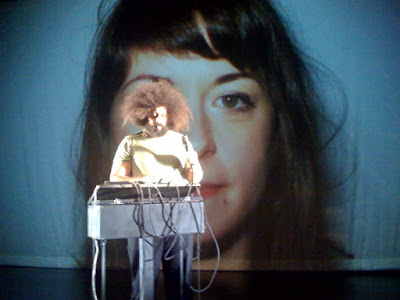 The entire performance followed suit. From beat boxing to movie clips, reenacted scenes and relationship commentary, Reggie took the audience on a journey through nonsensical brilliance. One theme that he always seems to return to, however, is the destruction of the human experience through technology. Not only does he beat box about the downfall of society through technology, but he couples his ideas with a paradoxical theme of technology throughout the performance. Every sketch seems to incorporate some form of equipment, almost every bit tied to the immortal internet.

The performance is captivating, intriguing, and above all hilarious! Made for those with extreme ADD or an attention span for funny man Reggie Watts, Transition is the perfect attraction for older Teen Tix members. (Contains course language.)

For more info, visit this link.