Review of The Swell Season @ SIFF Cinema by Chloe L.

Without having seen the movie or knowing about the band beforehand, this movie did not hold as much appeal to me as it could to others who have an understanding of the characters. No one is introduced, it is just assumed that we know the characters; therefore, it is important not to walk into this movie without background information. Even so, this movie had a certain appeal to me. The film grows on you with its extremely realistic approach and odd ability to capture the moment. Interspersed with songs, clips of landscapes, and quotes from interviews, the viewer gets a feeling for the high stress and emotions that these two artists had to go through during their tour. 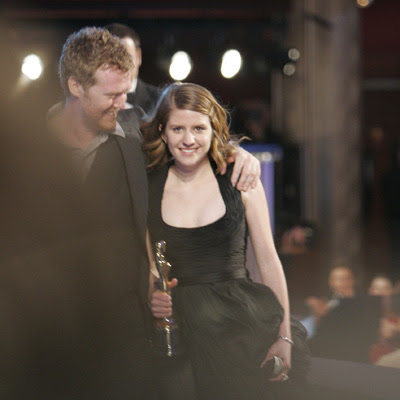 As we follow Glen and Markéta through their two year tour after winning their Oscar, we also watch as they fall apart. We feel the stress of life on the road and get a feeling for the struggles they endure. The black and white picture make the story seem that much more intimate and unrefined. The movie’s rawness can also make it feel choppy and uneven, yet the portrayal has an ability to pull a person into the story. You almost feel as if you were there and looking back on the event and you get caught in the emotion of the film. Through the truthful rendering of this film, we gain new light on what it really means to be an instant celebrity and all the trials that ensue. This film will be loved by all those who love the couple and understand the background of the movie. It also gives a fair warning to all those who are chasing this lifestyle in the spotlight. Look forward to a movie of startling truthfulness and relatability.