#8 in our "Twilight Makes Me" series, by Dylan Z 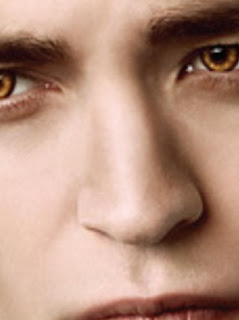 It makes me really think about all the pros and cons of both sides of the argument. I have, in fact, read all four books and seen the first two movies. It is in my personal opinion a horrible piece of literature and a bad movie franchise, but let’s zoom back a little. Am I Twilight’s directed audience? No I am not. Teenage and younger age girls are the target audience and for that target audience Twilight is pretty good. My sister who is 11 right now loves this series and so do all her friends so that is why Twilight in theory isn’t really all that bad. It does what a book is supposed to do; it entertains it’s readers. Some of you will want to scream blasphemy in my face and never speak to me again but as my dad (who has read all the books) said to me “its really bad but it draws you in because you want to know whether or not someone dies in the end and it’s a quick read so you really don’t have to deal with it for that long.” Yes, there are much better books that our generation could be reading at the moment but if you really think about it its kind of surprising to see that some of these kids are reading for fun. As an actor I’m supposed to watch Twilight and point out all the horrid acting in it. But I ask you, how good of a job can you do with a really bad script? A REALLY bad script. Look back at Harry Potter, didn’t you like Cedric Diggory? Or what about Sharkboy and Lavagirl? If you were still watching near the end of the second movie one of the head honcho vampires played Antony in Sweeney Todd! These actors are floundering about on camera because they really can’t do any better and for that I salute (some of) them. So please don’t hold this against any of them, it’ll all blow over in a couple of years and we can move on to the next teen craze.