Review of Pilgrims Musa and Sheri in the New World at ACT Theatre by Emma M. 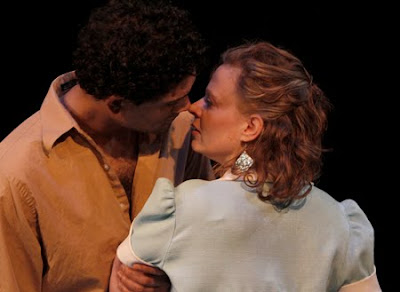 Shanga Parker as Musa and Carol Roscoe as Sheri
Photo by Chris Bennion
You stumble into A Contemporary Theatre—better known as ACT. As you take your seat and scope out the round cozy playing space, you wonder what awaits you in the next hour. The answer: delight. Pilgrims Musa and Sheri in the New World takes you on a wonderfully witty ride into the lives of these mixed-up lovers. “The course of true love never did run smooth,” so Sheri and Musa find out when they embark on a relationship and run into several hilarious and perilous problems along the way. You’re probably jumping up and down in your seat (or at least you should be) asking “what problems?!” Discovering is half the fun, so you’re just going to have to be surprised!

The brand new play is written by Yussef El Guindi. Pilgrims deals with important themes, like what does it mean to be an immigrant or a pilgrim?, and what do people want out of relationships? El Guindi approaches his topics with an unabashed sincerity and cutting wit. However, by the end of the play El Guindi’s message that we are all “pilgrims” on the circle of life becomes very clear. In fact, it's a bit bash-you-over-the-head, I-was-trying-to-make-a-point-and-in-case- you-didn’t-get-it...here-it-is! clear. Yes, yes we got the point. Trust me we didn’t fall asleep, it’s much too good a play for that! El Guindi undermines the cleverness of his own play because up until that point it has been based on the subtlety of his humor and wisdom.

The clever wit is taken to the next level when you add all the talented acting. Starring as Sheri, Carol Roscoe, it can be safely said, steals the show. The over-talkative, relationship troubled, spunky waitress Roscoe portrays is brought to life by her exuberant energy. 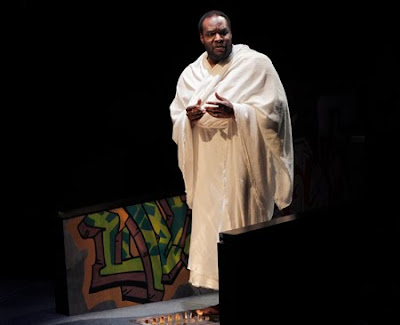 With the exception of the awkward writing at the end of the play, Pilgrims is a funny and engaging play, transformed into stellar performance by the whole company. A sparkling tale of true love and new journeys, Pilgrims is the play to see this summer.