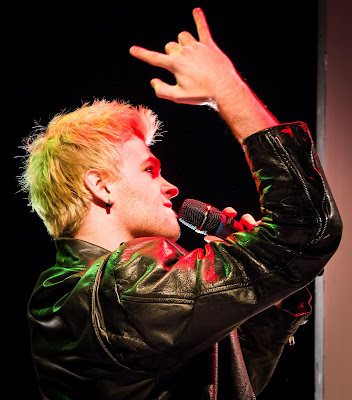 Thick, artificial smoke fills the theatre. The last-arriving audience members scurry to their seats, guiltily holding bags of candy. A twenty-something Andrew Jackson with thick guy-liner, a wide cowboy’s stance, and the air of a late ‘90s punk rocker stares you down so intensely that you slink back a little bit into your seat. Welcome to the audience of Bloody Bloody Andrew Jackson, the latest production by ArtsWest and former Broadway show.

Bloody Bloody Andrew Jackson is a musical melting pot of the arts, American history, rock music, sexual innuendo, and that unique brand of SNL-esque “in-your-face” humor — all of which is obvious before the house lights even go down. The stage is set with a mind-bending mix of old, not-too-old, and Presidential. Acoustic and electric guitars ornament the walls next to aged American flags; a disco ball hangs by a fast-moving slideshow of early 19th century political cartoons and paintings; a 15-foot picture of Andrew Jackson (Kody Bringman) flips you the bird next to a small homage to President Martin Van Buren. All that accompanies Van Buren’s picture is this caption in Sharpie: “Mutton chopped mother f***er!” 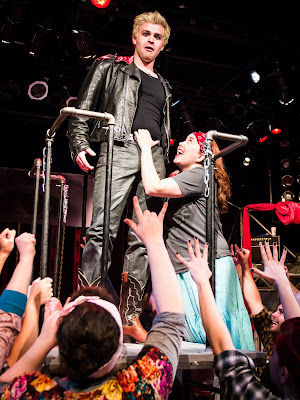 Yet despite first appearances, there is much more to Bloody Bloody Andrew Jackson than just slapstick humor. In the span of two hours, it takes apart the extremely controversial character of President Andrew Jackson, letting the audience understand (if not sympathize with) his motivations to achieve political power, as well as his mindset as the first real, non-aristocratic, “For The (white) People” President during the darker parts of his career.

Originally written by Alex Timbers, it translates how Andrew Jackson (a frontiersman, orphan, war hero, and then-popular 19th century figure) was seen during the early 1800s into how he would be seen now. Although now, in the 21st century, we tend to take one look at a Jackson’s sit-down portrait paintings and label him as just another President, he was once much more to the American people. Essentially, he was the first American celebrity. Who Jackson was then equivocates a punk rocking, emo young man in slightly too-tight pants in modern times. All that Alex Timbers did was make it into art.

However, though filled with enough historical jokes to make even the biggest U.S. history buff drool (after all, who really liked John Quincy Adams, anyways?), one of this musical’s greatest strengths is just that: its music. Each actor performing at ArtsWest has incredibly strong vocal skills. This, coupled with the fantastically witty lyrics (by Michael Friedman) and purposefully rough and assertive choreography, leads to musical numbers such as “Jackson is a Loser,” “Crisis Averted,” “The Corrupt Bargain,” and more. Additionally, the numbers feature a diverse variety of vocal leads. Some, of course, feature Andrew Jackson, but many more feature other main characters such as Andrew Jackson’s wife, Rachel (Meg McLynn), Cherokee chief Black Fox (Jeff Orton), and Henry Clay (Brian Lange), a politician portrayed more similarly to Scar á la Lion King than your average Secretary of State.

From the eclectic set, to the outstanding vocal talent, to the historical references, to Andrew Jackson telling George Washington to make sure Martha kept his bed warm for him at the Hermitage, Bloody Bloody Andrew Jackson exceeded all expectations.

But then again, what else can you really expect from a musical narrated by a woman who first appears riding a red Electric Mobility Scooter in sweat pants?

Bloody Bloody Andrew Jackson
ArtsWest
Through October 20
Ages 16+
TeenTix tickets are available in person or over the phone at ArtsWest's box office starting at noon Wednesday - Saturday and 2:00 on Sundays. TeenTix ticket availability is not guaranteed. We recommend calling ahead to confirm availability: 206.938.0339