Review of Trimpin | The Gurs Zyklus at On the Boards by Sam H-A.

Water dripping from the ceiling, fire making music, magnets causing piano strings to play, three women and a man singing. These are the only few of the many words that come to mind after seeing Trimpin's The Gurs Zyklus. 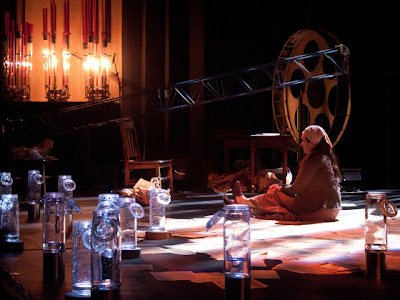 Through physics and simply using four natural elements, kinetic sculptor, sound artist, and composer Trimpin creates not only a beautiful story, but also a breathtaking array for the ears, and eyes. Set in 1940, The Gurs Zyklus follows the story of a young Jewish boy getting sent from his home to a concentration camp, Gurs, in southern France. Using just four vocalists, and sixty minutes, Trimpin and Rinde Eckert (co-director and writer of the show, along with being an actor) tell the story through words, song, and various instruments, among which are a fire organ (an organ that uses thermodynamics to create sound), various drops of water falling into glass jars, and magnets that make piano strings vibrate (using magnetic fields).

The entire audience is mesmerized by the beauty of everything that The Gurs Zyklus comprises: the story, the visuals, and the sounds that are heard ringing throughout the theatre. The story goes on through the train ride to Gurs, the letters from and to family, the many many memories placed by the hundreds of Jews who died and the few who lived through the terrifying experience.

The Gurs Zyklus is at times beautiful, and at times terrifying. It is a must-see for anyone who likes fire, music, a good story, or any kind of theatre in general.
The Gurs Zyklus is closed
To learn more about Trimpin, check out trimpinmovie.com